One of life’s surprises when raising a child with special needs is to discover how puberty can sometimes arrive right on time, or even much earlier than expected, despite the developmental delays. At least this was our experience with Brian at 11.5 years old and the initial discovery was quite shocking!

It was just another post–shower, towel- drying, kind of day for Brian when I discovered “hair” in his groin area that I initially thought was attached to the towel. I attempted to remove the hair and quickly discovered that it was pubic hair attached to Brian! 😳 I reacted by screaming for my husband, who came running upstairs, expecting to see blood or a broken bone.

Me: ” How is that possible with that baby face?! I thought puberty wouldn’t happen until when he was at least 30! ”

As ridiculous as my reaction was, I honestly didn’t believe that the onset of puberty for Brian would be SO early , as his other developmental milestones have always been so delayed- how ironic- who wudda thunk it? Well, it was time for me to revamp my whole way of thinking about this particular journey and it does make me a bit scared.

So far, Testosterone has been Brian’s friend, despite significant physical changes, like more body hair, broader shoulders, and a deepening of the tone of his voice. A moustache is starting to come in too, and an appetite that would match King Kong! Seriously, I have never seen a person consume so much food and still have room for more! Brian is also aware of his private parts, so we are trying to teach him appropriate social behavior on this front, and the concept of ” privacy”, but you can imagine this is not the easiest of lessons to teach to a severely disabled young man. Fortunately, he is easily redirected, but the whole sexuality issue in general is worrisome as it pertains to behavior and our children being potential victims, especially since they can’t tell us anything. 😞

Adolescence has also changed Brian’s personality to one of a young man who would rather lounge around in full “lie down on the couch mode”, with his hands behind his head. He is not in any hurry to do anything anytime soon. You would think the weight of the entire world is on his shoulders the way he “sighs” when asked to do something. Or how about when Brian is told to get up, he stares at us, then ” thinks about it” first- for quite a while! Brian has his own plan to do what he wants- sound familiar?

Brian recently decided to head to his bedroom after a shower and settle in his comfy chair with a book. He made it clear to me to “get lost” by waving me away. He also recently decided to sleep in the same chair one night after he went to bed, where we found him very late one night. Brian has also started to pick out his own clothes for school. I fear he may be a bit color blind, however, based on his choices, but he is trying. I’m actually very pleased to see these moments of self assertion and independence and believe that adolescence may be maturing Brian in this regard. Hopefully, this trend will continue in a positive way. Of course there is always a down side.

Hormones can also reek havoc in all adolescents and our special kids are not exempt. Testosterone can make our sons aggressive and physical. They don’t understand what’s happening and can’t communicate what’s bothering them. Sometimes I’m sure it’s just the testosterone itself, causing the aggression, similar to girls who suffer from PMS. It’s a difficult phase of life, and one I personally would never want to repeat. I can only imagine how our kids feel… it ain’t easy!

In the meantime, at least I understand why Brian waves me off these days, slams the door, and ignores my requests. He is growing up, asserting his “Teen Tude” and doesn’t need my interference, lol. For these moments of independence, I am happy for Brian and wish him many more throughout his lifetime. I pray that he will continue to assert himself whenever he is able to with the support and love of those who know him best. 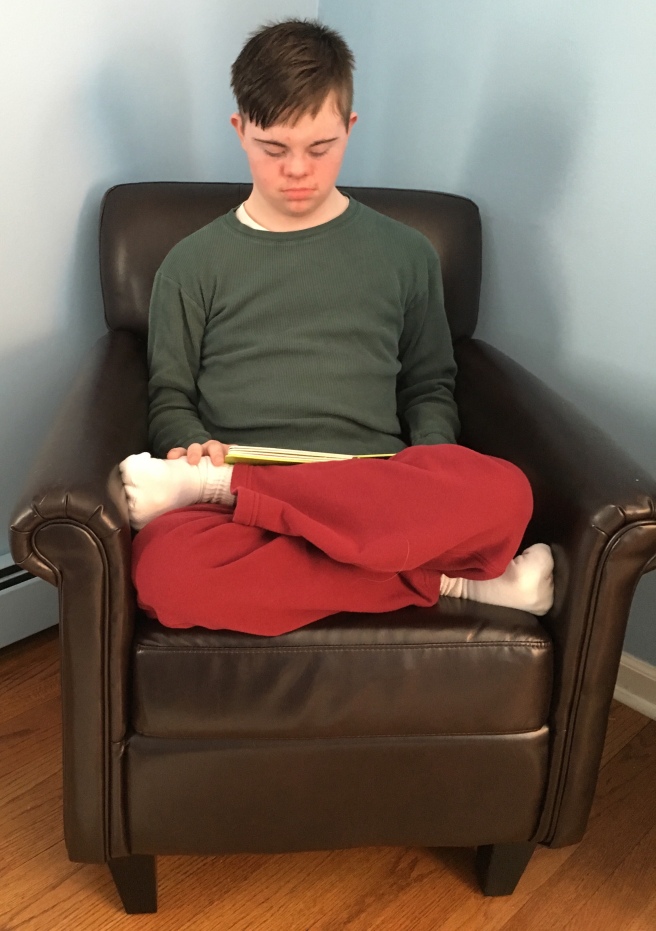 Until next time, thanks for reading!😊