It surpasses most feats of control that I have ever seen in recent times. I cringe when Brian does this and I wish we could find a solution for it: I don’t know how Brian is able to hold his urine for several hours at a time. He will not go at school. He typically voids in the morning before the bus arrives and will go after he arrives home, but sometimes not until dinner. I am fascinated how this is even humanly possible and simultaneously concerned that he can damage his kidneys. Brian is given every opportunity throughout the day to drink fluids, but will typically take only small amounts at a time, unless it is very hot outside. We even had a visit to the emergency room last summer because Brian hadn’t gone to the bathroom in 17 hours! My menopausal bladder couldn’t  even imagine holding for that long! After blood work and a renal ultrasound, (which thank goodness were normal), he eventually went, but to say that this whole ordeal was stressful would have been an understatement. The ER physician just shrugged his shoulders and said “some kids just do this for no reason” and advised us to keep pumping fluids into Brian. This is the tricky part, as he is not a big beverage enthusiast, so while we try to do just that, we also supplement his liquid intake with foods, such as yogurts and mandarin oranges.

We have also presented Brian with a variety of different beverages to sample, with the hopes that he will really like one particular flavor and will want to drink lots of it. I had gone to the supermarket with this mission in mind and loaded up the shopping cart with 20 different kinds of juice/flavored waters. The cashier joked that I must be really thirsty upon check out, which was my exact hope for Brian, or at least to have a “thirst/preference” for one of these drinks. The results were ambivalent at best, but we keep trying…Children with sensory integration disorder require several trials of practice whenever anything new is presented to them. Slow and steady is necessary, along with lots of patience and praise. So far, Brian is taking sips here and there of everything, so at least it’s progress, but no Favorite Beverage yet. It can be exhausting, so I need to keep my humor intact and take some deep breaths….

Just to spice things up- Brian had 2 episodes of blood in his urine a couple of months ago, with the last episode warranting another visit to the ER. This time, I was more prepared and grabbed a pair of nail clippers and manicure scissors on the way out the door. I know Brian would receive Versed, a drug that provides delicious conscious sedation ( for more blood work and diagnostic testing), making any sensory activity possible, such as trimming Brian finger and toe nails, and hair. These personal grooming activities are otherwise very challenging, especially haircuts, which requires the strength of Hercules and 3 adults. My husband and I never sweat so much then after one of these episodes. The Haircutting Wars will be a separate blog of its own, so stay tuned! In the meantime, back in the ER….

More extensive blood labs were taken under Versed, (in addition to Brian’s annual blood labs, might as well kill 2 birds with the one stone and avoid a meltdown at Lab Corp!)and the results were once again normal, except for the white blood cell counts, which were high, and a blood marker called ASO, that was also very elevated and indicated that Brian had been exposed to strep at some point over this past year, (which he had been), actually 2 times with strep infections of the throat. I learned that strep can sometimes travel to the kidneys and do some serious damage. You can imagine my anxiety upon this discovery, trying nevertheless to be calm, but finding this difficult because of Brian’s extensive medical history.  This was probably  a urinary tract infection, (UTI), but the ER doctor said that only a postive urine culture could confirm that.  We would have to wait 48 hours for that result- so in the meantime, it was presumed that Brian had a UTI and he was to begin a course of antibiotics immediately. The second level of the renal ultrasound was normal, thank goodness, so at least structurally everything was OK, as well as Brian’s urinary function. So a clipped and coiffed Brian was discharged from the ER with a prescription in hand and a desire for the movie, “Frozen”.  His wish was granted after the intial dose of antibiotic was taken and then we waited for the urine culture results…

Fast forward to 48 hours later, the result is in, and it is: negative!  The ER doc recommended that we see a pediatric nephrologist as soon as possible, and to stop the antiobiotic. We were given a referral and set up the appointment for the following week.  Miraculously, I was able to collect a urine sample from Brian 30 minutes before our appointment. The high ASO blood lab result was still heavy on my mind right before we entered the doctors office, as much as I tried to dismiss it. You would think after everything Brian has been through: open heart surgery, an orchiopexy, eye surgery, ear.tubes, and various orthopedic challenges, that I would be somehow stronger as a result  or used to medical adventures. Heck, I’m a colon cancer survivor and went through surgery and 12 rounds of chemo!  But when it comes to our children, that instinct to protect them at all times is so powerful that it can supercede logic and rational thought. I was definitely having one of those moments again. 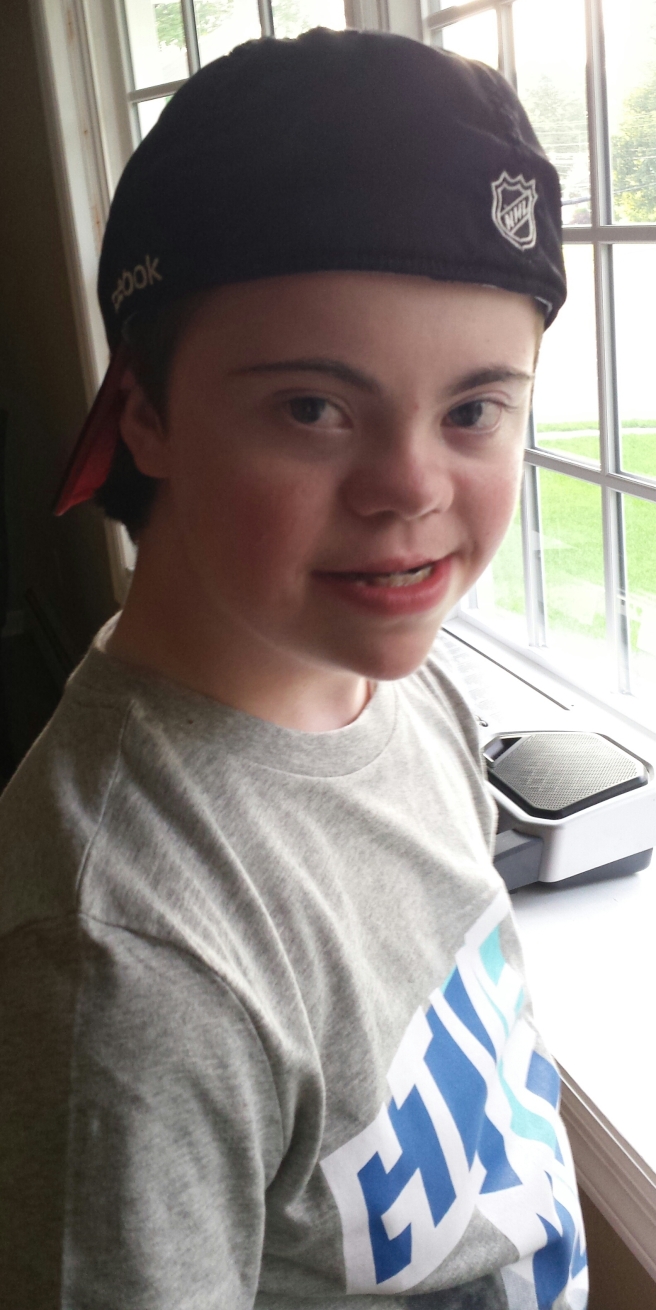 The pediatric nephrologist is warm and engaging . Brian connects with her immediately; I am at ease within a minute. She examines him without resistance on his part- unbelievable, it’s all good so far. Doctor then queries me, reviews the extensive ER report, tests Brian’s urine with the dipstick, then smiles broadly. The urine is normal! Drum roll……….and the verdict is: viral cystitis . This is a viral bladder infection, which can cause bleeding and takes a month to clear up, hence the 2 bleeding episodes that Brian had had. It also explains why the urine culture was negative, as it was not a bacterial infection. Viral
cystitis happens infrequently, which made me smile as Brian often  seems to be on the “rare line” when it comes to his medical issues. In this instance, the bladder was acting a little crazy, like a mad bladder does, when it has a viral infection. It presents like a UTI, but it’s not. It took an ER visit to get this ball rolling and the story concluded happily with this lovely pediatric nephrologist, so I am truly grateful. Regarding that pesky ASO blood lab result?…Doctor waved her hand dismissively when this subject came up- “This value means nothing-it only shows that Brian was exposed to strep at some point over the past year and has nothing to do with his kidney function. The number will return to the normal range over time”.  Hip,Hip, Hooray!! 🙂

But the best was yet to come. I explained Brian’s beverage intake challenges with the doctor. She agreed that Brian needs to drink more (though the viral cystitis was not related to how much Brian was or was not drinking) and suggested trying Crystal Lite. It’s one of the 20 beverages that we did NOT try yet and have lots of at home! Doctor further explained that Crystal Lite has an ingredient in it that breaks down kidney stones, while being tasty, and low in calories. Triple Bonus! And it’s super cheap to buy in bulk because of Costco. We already had tons of it at home, as my husband enjoys an “Arnold Palmer”,.which is Crystal Lite ice tea  and  lemonade mixed together.

As soon as we arrived home, I made an “Arnold Palmer” for Master Brian and he enjoyed it!  He didn’t guzzle it down, but he is taking at least more than a sip at a time, which is a better result than what we had with the other 20 beverages. How ironic that we have had Crystal Lite at  home for years now, but the idea for Brian to try it had totally eluded me. Brian continues to drink more Crystal Lite and we continue to explore other flavors, without breaking the bank. And as far as going to the bathroom? Brian still won’t go at school, but he is voiding more, as he drinks more. One day at a time…

It took a circuitous adventure to reach this happy ending, but I’m sure grateful that the troublemaker in this episode was just a mad bladder and nothing more. The Crystal Lite suggestion by the nephrologist proved to be brilliant and accepted by Brian, which is a huge deal and a relief for us.
Good ol’ “Arnold Palmers”- what a difference the right beverage makes for a young boy’s palate and a Mom’s peace of mind- cheers!!

Until next time- thanks for reading! 🙂